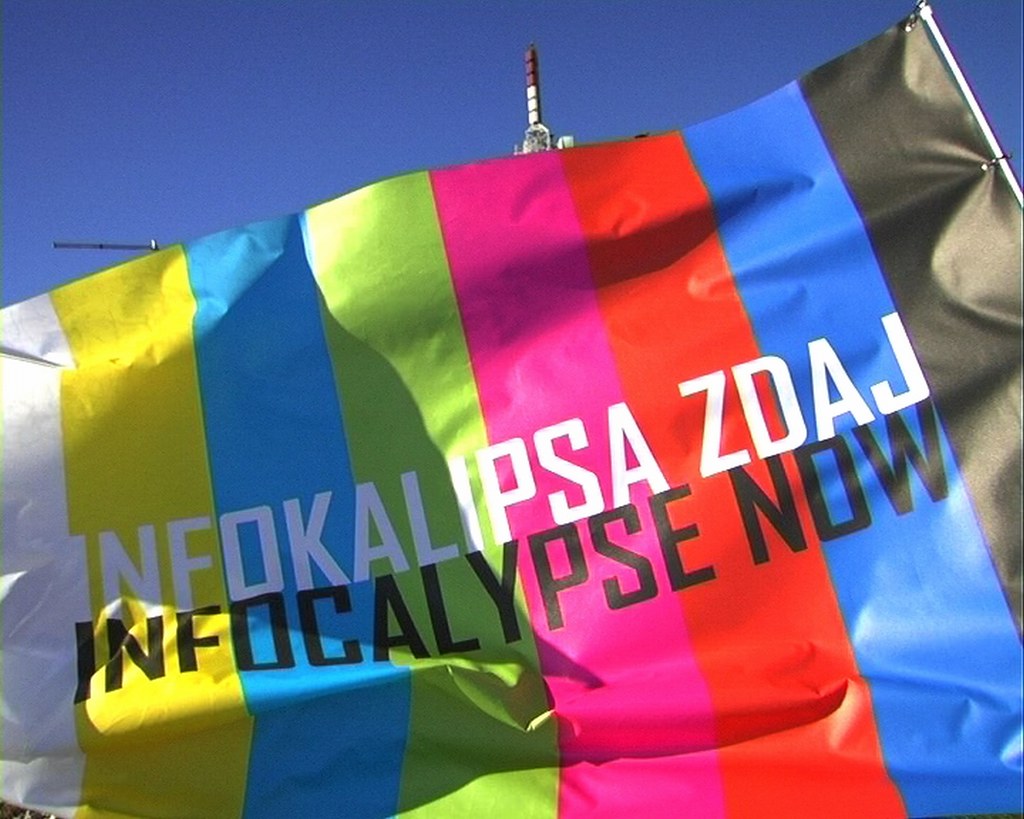 Infocalypse Now! is an initiative for the creation of an autonomous media zone in the 700 MHz spectrum, within which analogue television stations broadcast at present. With the introduction of the digital signal by 2012, the majority of the spectrum, just like the present-day analogue technology, will become a junkyard, which will be appropriated by the capital.
Since the majority of the frequency space will become unutilised and since analogue technology necessary for transmission and reception is extremely accessible and cheap, it is downright appropriate that a part of the frequencies is occupied by the civil sphere, to which the public goods, such as water, health services, frequency spectrum etc., are intended after all.
A greater accessibility of the 700 MHz spectrum – a very useful low-frequency band – would, besides offering non-commercial television contents and independent production, stimulate the development of innovations in the field of wireless Internet, improve the local communication network, contribute to the development of small enterprise and, last but not least, prevent households, individuals and groups with low incomes from lagging behind development while technology advances.

The video is part of the author’s Initiative for the establishment of an autonomous media zone Infocalypse now! Requiem for a dying medium in some way honor the disappearance of the analog signal from the mass use. Spectrum, which was for many years the field of various struggles, is now empty and unused. Laying flag next to the large antenna on the transmitter Nanos means occupying the abandoned space, the virtual occupation, Pyrrhic victory, from which, however, can happen something useful. 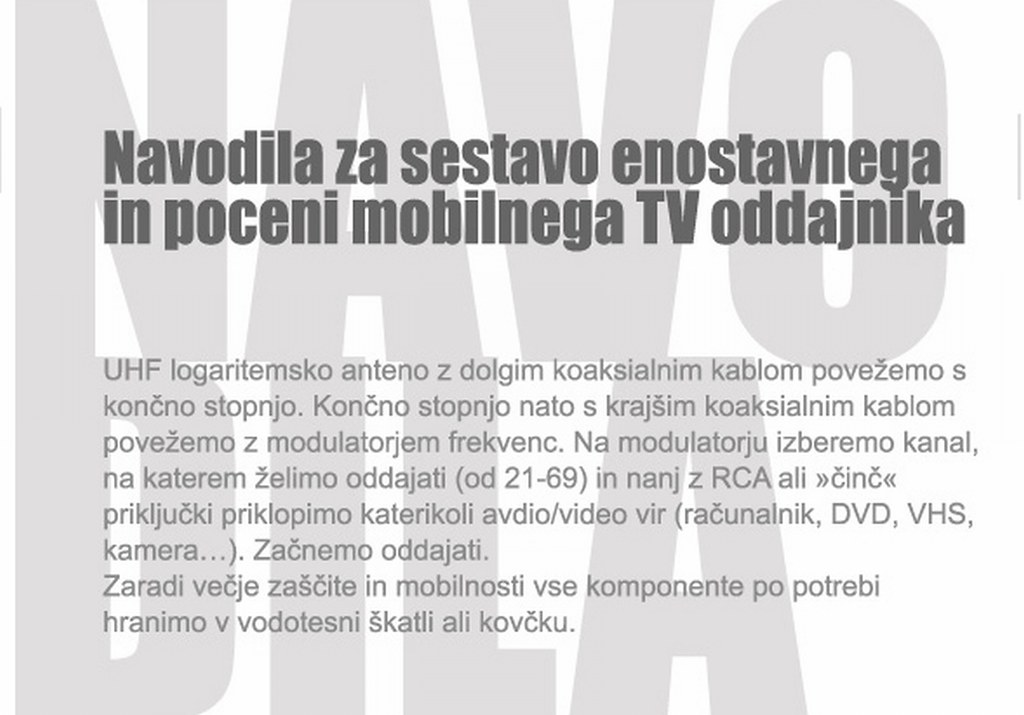 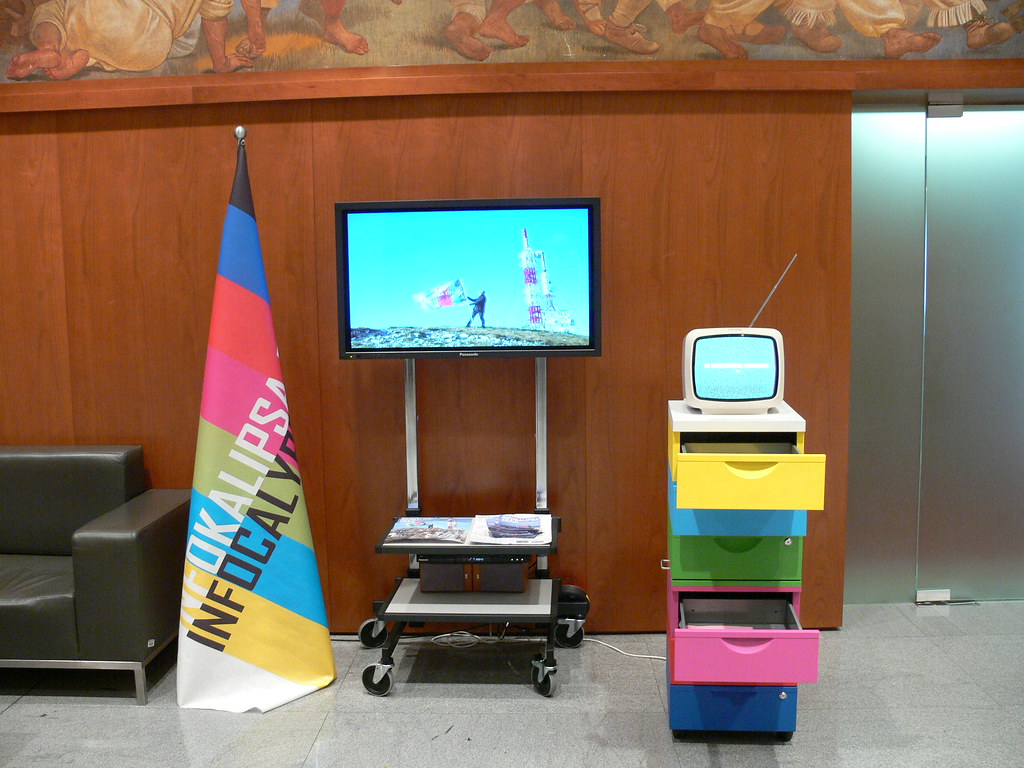 Continuation of the project in a form of a manifest in a Slovenian parliament.

“In the absence of public debate on the topic of sales and alternative use of public frequencies in the media, the public debate opens up in the context of contemporary art. Art, which is given to parliamentarians and the general public must break the stereotypes that contemporary art in the public space is not able to produce concrete results, it is intended only to itself that engaged art convinces just have to believe … “

The project Infocalypse now! In 2007 began to draw attention to the need to prevent the complete sales of public frequencies , which will be released until 2012 due to the transition from analogue to digital television broadcasting . Discharged broadcasting frequency is the promise that they will be sold at public auction to the highest bidders . At the same time raises the question of why broadcast frequencies are a public good – last of all citizens – completely sold out and why not with a little vision to take advantage of this unique social, cultural , technological and economic opportunity that we at this historic transition offers . Let me just mention that, due to technological progress frequency band can be used to build a wireless broadband Internet networks , which would allow cheaper broadband Internet access to all citizens of the Republic of Slovenia.

Since the loss of the frequency spectrum as a public good at first glance does not have a social dimension , people do not feel the loss spectrum directly as an existential threat . It is a loss that primarily brings about more information poverty. Organization wider public initiatives to prevent complete sell-out and advocated partial or even to preserve the entire spectrum as a public good , it is therefore practically impossible. Continuation of the project is therefore of multimedia centers , galleries and public spaces , where he worked until now moving into the epicenter of power and decision-making in the national parliament , where it will be in the coming years wrote and sealed the fate of these public goods .
The manifesto , written as a reflection on this occasion , in the context of public actions in the lobby of the National Assembly can be read as an art , which is aimed at parliamentarians . The manifesto consists of a concrete instructions to familiarize them with the advantages of public use of the frequency spectrum and how to deal with the adoption of legislation that re- allocation of frequencies will not be left solely to the logic of the best provider and we finally had some benefit from the new distribution of the citizens .
The manifest will of Parliament at the door of the National Assembly tirelessly to share especially for this occasion made machine . Next to it you will be parliamentarians and all other visitors Parliament can visit the video titled Requiem for a dying medium.