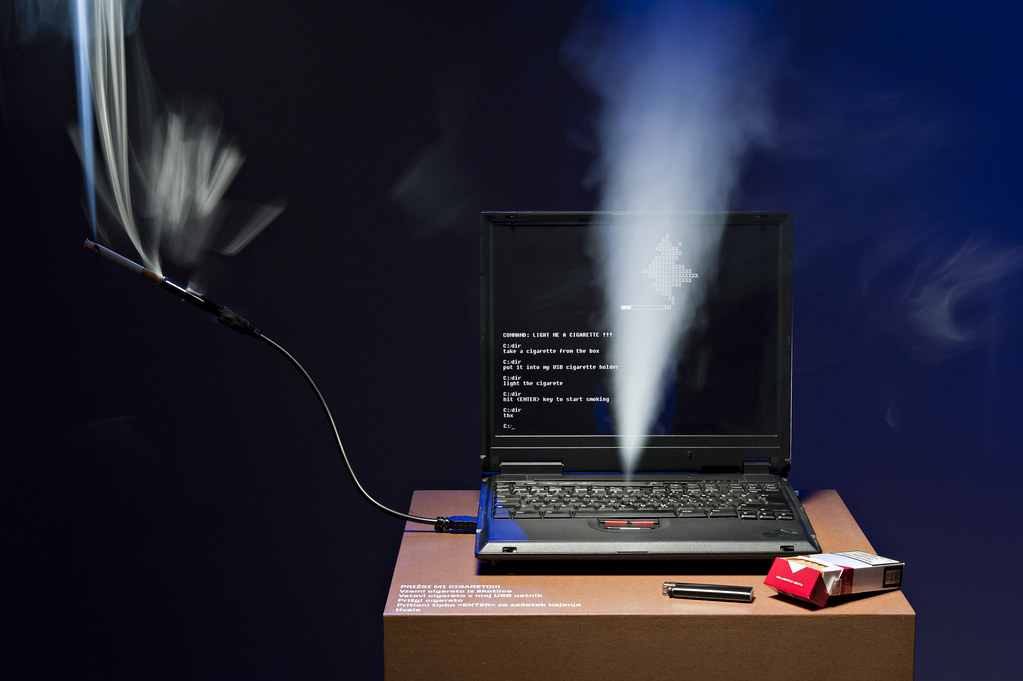 The project thematises the socially increasingly outcast act of smoking and its agents, the smokers. When on standby, a remodelled laptop with a mouthpiece displays the order “Light a cigarette for me!”, and this is taking place in a room where the visitors are forbidden to smoke.

The artist is known for dealing with current social phenomena. With his multimedia and interactive works he actively explores in the field of ecology and reminds us on the recycling of goods in the broadest sense. The exhibition at the Tobačna 001 focuses on the segment of the society which is pushed to the marginality as a non-pure moment in an otherwise brilliant picture of everyday life.

Central to Sašo Sedlaček’s artistic practice are socially engaged themes dealing with trash, recycling, and technology, which the artist addresses with sharp-witted humor to comment on the harsh reality of global pollution.

Sedlaček’s latest project, iSmoke 2, follows his dedication to the above issues. Made of waste technology, it thematizes the increasingly socially frowned-upon act of smoking and its perpetrators – smokers. A laptop in standby mode with a built-in cigarette holder has the instruction “Light me a cigarette!!” written on the screen, and the operating system guides us through the process of fulfilling its wish. Using the robot not only as an allusion to the present-day model of life marked by our total dependence on technology, Sedlaček points out the fact that the technical gadgets we use are also totally dependent – on our good will. Mobile phones, digital players of all kinds, and computers are being constantly, uncontrollably replaced by forever newer models, or else have so many programs installed that they shut down due to system overload. And that is exactly what this quirky automaton yearning for a break is like. With it, the artist has created a modern satirical version of a chilling idea variously embodied in literature and film over the past 100 years (from Maria in Metropolis, 1927, to Roy in Blade Runner, 1982, or VIKI in I, Robot, 2004), i. e. that of a formerly docile and compliant robot finding its own will to power, forgetting the Three Laws of Robotics, and setting out to exterminate humanity. Despite the huge advances in technology, however, the ruthless, omnipresent artificial intelligence embodied as the iSmoke 2 robot just hankers for a cigarette break.

Sedlaček bases the philosophical dimension of the topical questions of what machines are and what our attitude to them is on the premise that they are programmed technological toys without emotion, which are nonetheless capable of actions that can trigger emotional responses from us. This does not depend on the visual similarity between man and robot, but stems from the analogy as to the way they act. The automaton’s act of smoking in a place where visitors are forbidden to smoke unquestionably has a seed of rebellion in it, questioning as it does the ratio between permission and prohibition and raising the question how a machine that has been programmed to carry out a task can be obstructed. When we think of the artist’s earlier projects on garbage, dirt, and pollution, the association to Svetlana Makarovič’s “smokers’ manifesto” (Damn Smokers) almost automatically springs to mind. The damn smoker, the filthy reject, destroying the world’s atmosphere with his filthy habit, blowing more toxins into the air than all the gasoline, automobile, and warfare industries put together, is a suitable allegory for the individual in the capitalist world. As a consumer, he is incessantly forced by the system to choose between not smoking or smoking and bearing the consequences thereof; his rebellion against corporate polluters, however, is destined to fail.

Production: Museum and Galleries of the City of Ljubljana